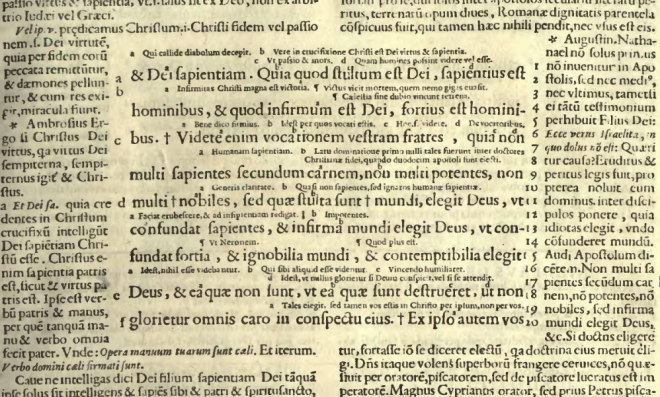 Following on my last post about Bullinger’s reading of 1 Cor. 1:21, here’s the set of interesting glosses from Nicholas of Lyra (c.1270-1349) on the same passage, and the following verse. Notice the way he uses the same language as Bullinger (and Aquinas and Calvin, not incidentally) about God choosing “another way.” Again, on 1 Cor. 1:21-22: “For since, in the wisdom of God, the world did not know God through wisdom, it pleased God through the foolishness of what we preach to save those who believe. For Jews demand signs and Greeks seek wisdom…” Here is a translation of the glosses, followed by the original and commentary:

“For since, in the wisdom of God,” that is, through the knowledge of creatures which are a kind of mirror of God.

“The world did not know,” that is, the wise of the world.

“God,” to knowledge of whom the mirror of creatures leads, as it says in Romans 1:21, “For although they knew God, they did not honour him as God or give thanks to him, but they became futile in their thinking, and their foolish hearts were darkened,” etc. And therefore he continues:

“It pleased God through the foolishness of what we preach to save those who believe,” that is, by another means than the wisdom of philosophers, namely, through the preaching of the cross, which philosophers considered foolish due to the failure of their understanding. For it is much more reasonable to believe in a position established by the resurrection of a dead person or anything of this kind, of which it is certain that it cannot occur except by God’s doing, who cannot be the witness or guarantor of something false, than in any conclusion approved by human reason, which is able to fail. For in this, he acts as a benevolent teacher, who seeing that his learners had not grasped the truth established by him in one way, proceeded to another.

“For Jews.” Here then the Apostle displays his proof, namely, that relying on “words of wisdom” is unfitting for the teaching of faith, because it empties out salvation through the cross of Christ, as he says, “For the Jews demand signs.” For the law of the Jews was given in the fear of God’s power (Ex. 20). And therefore, from whomever would bring a certain teaching they demand signs of divine power for its proof.

“And Greeks seek wisdom.” For they were filled with philosophical knowledge which proceeds by reasoning, and therefore did not want to accept anything unless it were proved by reason.

First of all, we find this talk of the “mirror of creatures.” This metaphor of the “mirror” (speculum) is used with great significance by John Calvin, in addition to speech about the “theatre” of God’s glory. In fact, we find a related visual metaphor in the “most beautiful spectacle” (spectaculum, either ‘a show,’ ‘a spectacle’ in a theatre, or the theatre seat from which one saw the show) spoken of by Heinrich Bullinger and Konrad Pellikan in their 1 Corinthians commentaries. This is perhaps the most interesting connection between both these metaphors: they are strikingly visual. We see God’s wisdom in what he has made, whether this ‘seeing’ is like the reflection in a mirror or the display of a theatre performance.

Secondly, it is very interesting–and not paralleled in the earlier Aquinas or the later Reformers, so far as I have seen–how much attention Lyra pays to the ‘rationality’ or ‘reasonableness’ of Christian belief. One might expect Paul’s language of the “foolishness of what was preached” to give space for the opposite reading here: that one ought to look for something beyond the rational or the reasonable or simply other than what reason dictates. Yet Lyra takes this opportunity to extend or dilate the meaning of ‘rationality,’ claiming that because God is the guarantor or witness of things like Christ’s resurrection, for instance, they are “much more reasonable” (multo… rationabilius) than human philosophy. For this reason, he also attacks the ‘Greeks,’ who will accept nothing their reason does not approve.

Finally, as in every (pre-critical) commentator on this verse, we get a comment about God’s concern as a teacher–here a “benevolent teacher.” Seeing that humanity had not grasped God’s wisdom in his “mirror of creatures,” God took another approach, namely, sending his only Son in human form: wisdom incarnate.

“For if someone experiences love towards the Word, and if he enjoys hearing, speaking, thinking, lecturing, and writing about Christ, he should know that this is not a work of human will or reason but a gift of the Holy Spirit.”